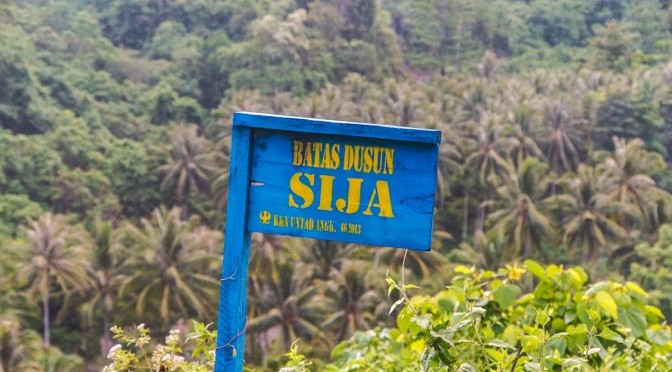 Sija, Indonesia is a small village located in Central Sulawesi. From Palu, Indonesia, it was a six hour car ride, followed by a forty-five minute hike to get to this village. We carried up what we could on our backs, and hired a motorbike to bring up the rest.

The people in this village were so welcoming. I had no idea what to expect, but was overwhelmed by the generosity of those who had so little. The simplicity of life in this village, and the true genuine nature of the people was heart warming. We stayed in this village for nine days with Paul and Krisanne, and their two boys.

I thought that I would have time to journal, write, and reflect during my stay with the Emch family, especially without the distractions that I was used to… but then I met Caleb and Jonah. Two adorable, independent, strong-willed little boys that were so much fun and had so much energy. In between all the wonderful chaos, I was able to scribble down some random, in no order, memories of our time in Sija.

Attempting to learn as many Indonesian words as I could, forgetting, practicing, relearning, and more often than not, playing charades and using body language to help communicate the rest.

Kids of all ages, everywhere, running, playing and yelling without much of a schedule or set of rules to follow.

Naked boys running and playing in the river that runs through the village all day long.

Excitement over ice, as it would be a 45 minute hike down the mountain to purchase it. This gets kind of tricky, as ice melts fast in the tropics, so you had only a short window of time to enjoy it.

Roosters crowing all hours of the day and night, roaming around freely.

Time spent playing with Jonah and Caleb, and learning their very big personalities.

Deep cleaning rooms in the house in Sija, to find a little rat. After Paul made glue traps, we captured the entire family.

Making a double batch of bread and turning it into cinnamon rolls, dough gods, loaves of bread, and monkey bread to share with neighbors and kids in the village.

Village kid’s love to hold and play with Jonah and Caleb.

Thad and Paul spraying the house down and killing hundreds if not thousands of mosquitos, flies, and gnats before we fully moved in.

Neighbors giving us coconuts from their very full coconut tree to have fresh coconut water. We also received older coconuts to make coconut milk with our curry dishes.

Hearing the horn of the “fish guy”, and chasing him down. He would bring his catch, by motorbike, up to Sija, where we could buy fresh fish for merely a few dollars.

Kids sitting on the steps, staring in the house, waiting to play again. They didn’t have much of a set schedule, so seemed bored when it was rest time, night time, or mealtime in the Emch household.

Wild Anoa, cow/deer look alike, or mini water buffalo, caught and made into a pet. Only a few thousand left in entire world, and only found in Central Sulawesi.

We attended a few Indonesian Bible studies, and attempted to follow along. We would also attempt to read the notes and sing along in this foreign language, which we didn’t understand.

The heavy, down-pouring rain in the middle of the night was deafening. We would all be woken up by the hard rain on the tin roof. If I were to yell, it would be close to impossible to hear me with the noise of the rain.

There was one female dog in heat, being chased by five mangy male dogs, fighting and barking for days straight. All the villagers would throw stones to get them to stop fighting. I was ready to shoot them all… more humane?

Playing in the river with the kids, having water fights, and cooling down, was a blast. To only realize that a scratch on my ankle got infected by this water, causing my entire foot to double in size, and take over three weeks to heal.

The Emch library provided books, magazines, and comics. Everyone from the village was waiting and anticipating its opening. It was fun to see how much they enjoy reading and getting new books.

Buying local ginger coffee at the market, and having to mix it 50/50 with regular coffee so we could actually drink it. It was so strong, it almost burned the back of our throats going down, but was so delicious.

Kids following me around, jumping in any photo I would try to take, posing, and wanting to see it right away.

The generator would run for a few hours at night, otherwise there was no electricity. No phone coverage, wifi, or world connection either.

Going to the market, 45 minute hike down the mountain to buy fresh produce, baked goods, and fish. People at the market were not used to seeing white people in the mountain region, so would just stop and stare endlessly.

The climate and conditions were extremely HOT. We would take 2-3 cold water bucket showers a day to cool our body temperatures down. Sija basically sits on the equator and has consistently high temperatures and humidity.

We would sweat all day long, everyday. We would need to wash every item of clothing after wearing it only once, or even after a few hours. Also, all of the clothes were hand washed.

Volleyball and Takraw nets were always set up. Competitive matches were being played by the villagers throughout the day.

Mortar and pestle were used daily to grind all fresh herbs into delicious pastes for seasoning. Indonesian women are excellent cooks. All curries and dishes have such amazing authentic flavors.

Both Thad and I gained weight from the amazing food. We were gluttons, as everything was always amazing, leftovers would go bad, and we didn’t want to let anything go to waste!

Three large, full mango trees stand behind the Emch’s house. As soon as one drops, the kids somehow hear it fall, and come running to find it before we even have a chance.

The flies and gnats during the day were enough to make us go mad, swarming our eyes and face.

Countless kids would be in the living room playing everyday. They were so adorable and loved being played with. They seemed content and excited with so little.

We went on several hikes to the Red Rocks, market, through the village, and to the scenic overlook. With any amount of exertion, we would be literally dripping in sweat.

The mountains surrounding Sija and the neighboring areas were amazing. So green and lush, in their untouched, natural state.

Our food options had to be non-perishable. Anything requiring refrigeration would have to be cooked right away. It was a totally different meal planning process.

Church was very important in the village. Everyone would dress up, look nice, and then continue to sweat during the service with the stale air, no breeze, and sweltering conditions.

These are just a few of the thoughts and memories that I wrote down during our time in Sija. There is so much more to say and stories to tell, but this randomness will hopefully give you a good glimpse at our truly amazing time with the Emch family in Sija, Indonesia.

Here’s a few more of our favorite photos of the 1000+ that we took in Sija!

One thought on “Sija Memories”