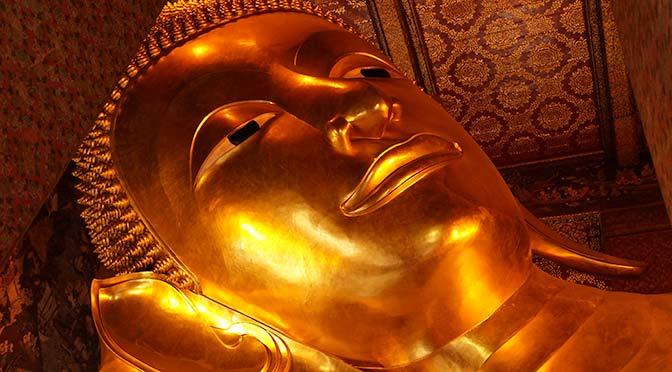 We were a little concerned when we flew into Bangkok, but in hindsight, it was because we were mostly ignorant and not fully aware of the situation. News outlets tend to report on the worst, and based on those short tidbits of information, one gets the impression that setting foot in Bangkok would be similar to that of a war zone.

After a bit of research and one particularly good resource for Bangkok shutdown information, we realized that the violence was restricted to several “protest sites”.

After our first night in Bangkok (safely near the airport), we found a hotel next to a BTS station (elevated train) and took the train right to it.

Bangkok seemed busy, but not dangerous. Throughout our four days there, we didn’t come across anything in the least bit dangerous or scary. It helped having Richard Barrow’s map of the danger areas.

Our hotel was the King Royal Garden Inn. At $30 USD per night, including a rooftop pool and breakfast, it worked well for us. And since we were next to the BTS, it gave us quick access to other parts of Bangkok as well.

Up early on our second day, we took a short ride and walk to the pier, where we picked up a day pass for the water taxi/shuttle. It ran all day up and down this particular section of the Chao Phraya River, allowing us to get on and off to see the sites we were interested in.

I think we are or will always be adjusting to this sort of heat. We wore pants and short-sleeved shirts (rather than the usual shorts and tank-tops), since we knew we’d be visiting Wat Pho, the temple known for its reclining Buddha.

The temple has very specific rules for skin coverage and will rent you temporary [sexy bright neon green] robes if you’re not properly covered.

The reclining Buddha is quite a sight, and definitely worth the visit to Wat Pho, not to mention the very interesting architecture, decor, and statues.

We skipped the palace next door, due partially to heat and partially to save money on the entrance fee. We did, however take time for some fresh coconut water and mango to help us keep cool.

Of course, no stop to Bangkok is complete without a stroll down Koh San road — the quintessential backpacker haven. With limitless choices for street food, cheap t-shirts, hostels, and miniature Buddha statues, there’s no wonder it draws a big crowd. Despite our general lack of interest in what it offered, besides food, it was definitely worth a look. Also, shopping, in general, is sort of a waste of time for us, since we’re traveling for a year with no desire to lug around the aforementioned statues.

After a quick retreat to our hotel for a dip in the pool and some time in our air-conditioned room, we boarded the train and ferry to hit up China Town.

After a delicious dinner and walk back to the pier, we found out the hard way that brochures and published travel times for Bangkok’s water shuttles can vary. Our in-hand brochure showed the last departure time from China Town at 10pm, but the [nearly identical] chart at the dock had the 10pm time covered up with masking tape. Needless to say, that was a bit frustrating.

Ready to get back to our hotel, but not eager to deal with tuk tuk drivers (they have a bad rap, in general), we tried getting a taxi. He wanted to charge us a high flat rate, so we begrudgingly hit up a nearby tuk tuk driver. After a couple unsuccessful conversations, we finally found one who would negotiate and we were pretty close to hitting our goal number, so away we went. 10 minutes later and 60 Baht (less than $2 USD) lighter, we arrived back at the King Royal Garden Inn.

The remainder of our few days in Bangkok can be summed up with a few phrases:

Check out the gallery below for a few more photos of Bangkok.

One thought on “a few days in Bangkok”