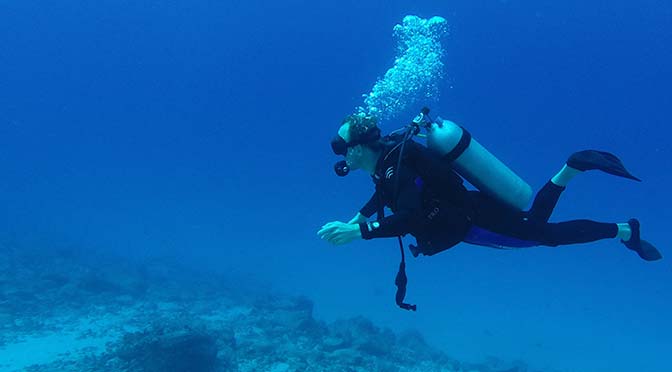 During our stay in Kona, I went scuba diving with my brother-in-law, Micah. The list of wildlife we encountered in one form or another in a matter of a few hours was ridiculous. I think we both left the pier on cloud 9.

During our 2 dives we saw sea turtles, an eagle ray, moray eels (see below), a 6 foot white-tipped reef shark inside a small cave (yes, we were in the cave with it), and loads of beautiful fish and coral.

During our surface interval between the 2 dives, our captain took us out to deeper waters to see what we could find. It turned out to be a very good day to be out, because there was lots to see!

On the way, we saw blue whales breeching in the distance. They weren’t super close, but they were clear enough to see and fun to watch.

Next, we ran into a pod of pilot whales (2nd biggest in the dolphin family after killer whales). Supposedly, these are pretty rare. Our captain took us out in front of them and we all jumped in with snorkels on… and they swam almost right past us. It was pretty incredible. They were massive.

Last, but not least, a pod of rough-toothed dolphins came nearby while we were checking out an experimental fish farm (where they raise fish in a huge net/cage out in open water).

I think it might be tough to top this amazing day at sea, but that’s not going to stop me from trying.